I mentioned on Wednesday that Zach and I attended Road Trip for Dads, and that once the event was over we attempted to conquer the Manitou Incline, as it had defeated us a few days prior.

The Incline is incredibly steep. It climbs from 6,600 feet elevation above sea level to 8,590 feet in less than a mile.  Don’t worry, though; there are steps to help you make the climb–2,744 of them to be exact.  At some points, especially the last third, the steps are so steep it is more like a ladder than a trail, or even steps.  The trail also features a “false summit,” which occurs on hiking trails when the hills are such that, when viewed from below, lends the appearance of being nearly at the top when you really have a long ways to go, which you only realize as you reach the false summit.

Signs at the beginning of the trail warn that it is quite literally not for the faint of heart, that it is extremely difficult, and that people have died attempting to climb to the top.

Just the kind of thing to help me feel manly.

This shot does a decent job illustrating how steep the Incline is.  At the top of what you can see is the false summit; there was still another third of the trail after that!

Because I am such a fine physical specimen, I recorded my thoughts along the way as Zach was taking breathing breaks.  They weren’t influenced by any Colorado substances, however the thin air may have been a factor.  So here are some things I considered along the way.

Don’t compare yourself to others.

I was taken by the variety of people attempting the trail. There were old people, young people, fat people and skinny people. There was a dude with abs that I will never have thanks to my Oreo addiction. A dad carrying his son on his shoulders. A guy who looked like he’d lifted weights all his life, huffing and puffing the whole way. A hippy looking lady listening to thrasher metal music playing loudly from her phone speaker. A Boston Marathon finisher (as her t-shirt purported) struggling to make the ascent. Many people taking breaks, while an old lady climbed very slow and steady, never stopping but always passing us while we stopped.

Just as there were all sorts of people on the trail, most of whom presumably eventually made it to the summit, we’ll encounter all types of people on life’s journey.  But we can’t judge ourselves or our abilities by comparing ourselves to them.  For example, if the older lady were standing next to the body-builder guy, most would say he is the one more likely to finish the climb.  But he was the one huffing and puffing as he trudged towards the top while the lady continued unabated.

As foster and adoptive dads, it can be all too easy to compare our family and how we are doing to other families.  We don’t know other families situations; even if they look like they are doing great, they may be really struggling. Or they may look like they are barely making it, but they could be perfectly happy.  Don’t compare yourself to others, compare yourself to yourself.  Are you happier than before?  Are you providing the environment for your kids to grow and thrive?

You have to take it one step at a time.

At one point along the way, I heard a guy say to his girlfriend, “Don’t look all the way up there, look two steps in front of you.” I also heard others talking about small goals to help themselves make it up, such as one girl suggesting that their family, “take a break every time we see a rock.”  Another person suggested that they take a break every time they made it to one of the washout-prevention grates that appeared periodically along the trail.

While “begin with the end in mind” might be good advice for investing or starting a business, “slow and steady wins the race” or “take it one step at a time” is much better advice for raising kids from tough backgrounds. Some times you just have to get through that day intact.  If we as dads spend too much time focusing on the day when our kids become adults, we’ll become frustrated, upset, and exhausted.  Focus on where they are today, and work on and enjoy that.

“If taking breaks means you make it to the top, then by all means.”  I said this to Zach as we started out.  Whether you are foolishly attempting to climb a ridiculously steep, ridiculously long set of stairs, or are parenting children in/from foster care, the advice rings true.

Just as it would be foolish for most of us to sprint to the top of the Manitou Incline (the record is 16 minutes, 42 seconds, BTW), it is foolish to try to do this without a few breaks along the way.  As we’ve preached before, find something to help you have a little time to catch your breath as a dad.  Zach and I would suggest Road Trip for Dads as one option, but you need to have things throughout the year.

The View at the End is Worth It.

In order to preserve the hypoxic nature of my original thoughts, here are a few more -essentially as I wrote them on the way up the mountain with minimal editing for clarity.

*It’s more encouraging to look at how far you’ve come rather than how far you have to go.

*Accept encouragement from others, even strangers. (I saw strangers talking about how much they had already accomplished while resting.)

*Be sure to drink a lot! (Take that however you like.)

*Beware the false summit. Your false summit might be just when you think you’ve got it figured out. Or maybe you are looking forward to when your kid turns 18, as if they will be fully prepared to live life on their own and won’t need you anymore.

*I saw a random shirt laying on the ground at one point. Don’t lose your shirt. Or your shit.

*We attempted to do this the first time upon arrival in Manitou Springs, but struggled because we weren’t acclimated. Today, because we are more used to the thin air we have made it much further. Be careful to not take on more than you should before you are ready.

*Bees. They seem scary at first, but are generally harmless and won’t hurt you. Unless you’re allergic–then you should be very afraid. Try to have perspective and not let little things “bug” you.

*Because we quit the hike early on Tuesday, we had a chance to meet a man named Zulu in the parking lot. He simply asked us for some bread, and because we had planned for sandwiches for lunch, we were able to give him not just bread, but enough to make 3 roast beef sandwiches, along with some chips and a drink. Maybe at times things don’t seem to work out like you’d hope. But if they did, we might miss real opportunities to bless someone we otherwise wouldn’t.

*”What are your pet peeves? People who stop a lot on the Incline?” Lady to friend. “Guilty” -me. Be able to laugh at yourself, your situation, mistakes you make.

The end view is going to be worth it.  Sometimes fostering or parenting adopted kids is simply challenging.  Nobody said it would be easy, ever.  But this journey is certainly worthwhile.  Helping a hurt, abused, or neglected child is incredibly difficult, but as I tell my boys, usually the things most worth doing are the most difficult. 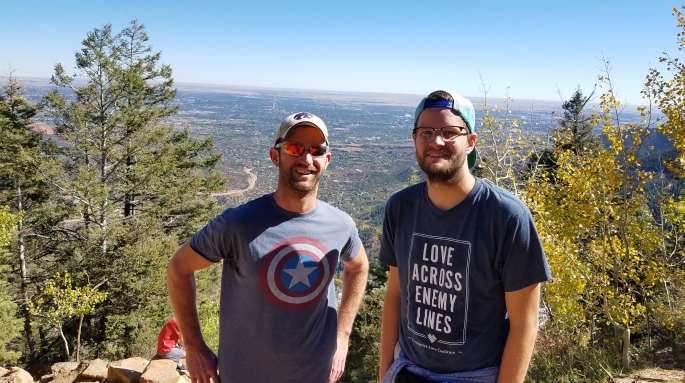 One thought on “Low-Oxygen Thoughts from the Manitou Incline”

The Foster Dads exists to amplify the voices of men involved in foster care and adoption, build connections between foster/adoptive fathers, and motivate other men to consider how they can support the foster/adoptive community.