Prior to becoming a foster parent, I rented out the extra two bedrooms in my house to roommates.  (Side note: If you ever get frustrated with your foster children, just know that weirdo roommates from Craigslist can be way worse!)  One roommate asked me if I had any house rules.  My response at the time was simply, “Don’t be a dick.”

As I was working through the class for getting licensed, somewhere in the gigantic pile of papers that made up my homework was a question about the house rules.  I wrote about the then-current rule, but decided that perhaps I should soften it up a bit.  Later when talking to one of the teachers, he suggested that perhaps a few more rules to clarify the first would be helpful.  I was asked to write about my house rules, so here goes.  Here is how they appear on the board hanging up in the living area. 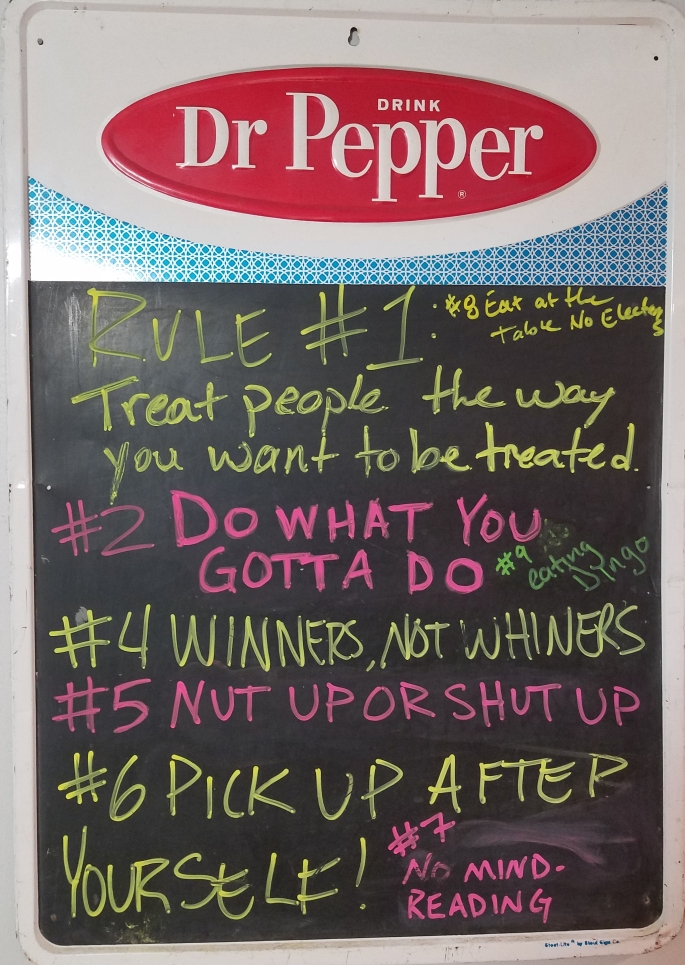 Rule #1 Treat People the Way You Want to be Treated

This one is obvious.

I wish this were obvious.

I have found that I have to explain over and over that this does NOT mean, “Treat people the way they treated you.”  As I go over house rules with a new placement, I always take a few minutes to attempt to explain the differences.  I know later on at some point, they will always say something like, “Well he treated me X way, so that must be how they want to be treated” or “he called me names so that must mean he wants to be called names.”

So this one is an ongoing conversation.  I’m frequently talking to the boys about what this rule really means.  Unfortunately those conversations tend to come when the boy has just done something they shouldn’t-so perhaps that means I need to work on this a little bit more.

For my boys, this usually means things like going to school, doing homework, going to therapy (those are the top three), cleaning the bedroom on occasion, doing their own laundry (I’m not touching their dirty underwear or socks!), doing a chore here or there.  When a kid says they don’t want to do something, I refer them to Rule #2. Probably won’t make them want to do their homework or clean their room, but I’ve got to try!

This rule came from by a little song my friend would sing to his young children when they were whining about something or another and he was tired of it.

The idea behind the rule in my house is a little more grandiose, and applies not only when they’re living in my home, but also well beyond.  My thought about this is that while I acknowledge that these kiddos have gone through all sorts of things that are awful in all sorts of ways, we want to work past this and not let it affect their future any more.

My goal for the boys of this rule is that rather than sit around “whining” about bad things that have happened in the past, that they would Do What You Gotta Do (reference #2) in order to be a winner!  I hope to motivate and inspire them to rise above the crap in their lives so that they can go on to being fulfilled and productive members of society. (AKA “Winners” in my book.)

This rule is inspired by the classic 2009 post-apocalyptic horror comedy film, Zombieland-one of my favorite movies.  Woody Harrelson’s character, Tallahassee, uses the phrase several times throughout, usually right before he embarks on another mission to kill some more of the undead, in his search for Twinkies.

For me, this rule first started out as a kind of joke, but in reality it embodies another high and lofty goal I have for my boys, not only while they’re in my home, but also later on in life.

One boy wanted to become a lifeguard.  He talked about it for months.  He set up chairs on the back deck and would pretend the yard was a pool and would rotate from chair to chair, life-guarding the dog.  But he was very nervous about the classes and didn’t want to go. I had to encourage him to “nut up or shut up” (I said it nicer than that most times) and take the class so he could follow his dream.

[Warning: There are a couple swears and some comedy blood.]

#6 Pick Up After Yourself

Oh goodness.  Selfishly, if I could choose only one rule to be followed, this one might be it.  There might be nothing that will make me crazy faster than finding food wrappers all over the place.  I recently found an apple core in the vent hole of the subwoofer!  Are you kidding me??

This rule was added later than the others.

I quickly discovered that many times the boys would not want to share something with me, or not want to communicate their needs or wants or concerns for whatever reason.  So I made it a rule that mindreading was not allowed.  That way, I can say, “Even if I could read your mind, it is against the rules, so you need to tell me what is going on.”  I use this rule as a tongue in cheek way of working with the boys on positive and appropriate communication.

#8 Eat at the Table, No Electronics

It doesn’t always happen due to hectic schedules, but I do try to have a few meals together as a family.  I absolutely hate when I’m spending time with someone or having a conversation, and their nose is in their phone.  Even though the boys (and I) usually plow through dinner rather quickly, if nothing else I want us all to have a few minutes of being together with no other distractions.

This is sometimes one of the most difficult rules to enforce, and has caused multiple arguments over time.  But I feel this is a way to communicate to the boys they are important to me and I want to know them better.

Dingo is the cat, Jackson is the dog.  This rule is primarily for Jackson but applies to everyone.

Of course there are many other rules that need to be followed, covering everything from wearing seat belts to bed times.  But I feel having too many signs hanging up all over the place can begin to feel unwelcoming and less home-like.  Therefore I choose to discuss those with the boys as time goes on and things come up.  The goal for the “official” rule board is more to communicate larger themes and goals I have for the boys, and help guide the discussions and applications of the smaller rules.

You may have noticed that number three is skipped in both my comments and the board.

That is because rather than on the board, Rule Number Three is written on the lid of the commode.  It states, “Aim IN the toilet, not AT the toilet!”

The Foster Dads exists to amplify the voices of men involved in foster care and adoption, build connections between foster/adoptive fathers, and motivate other men to consider how they can support the foster/adoptive community.